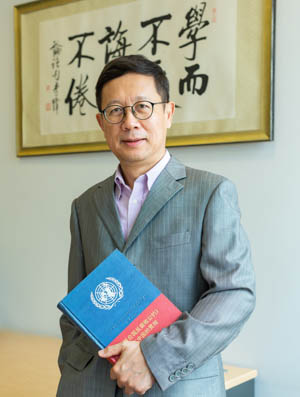 Dr. Vincent Cheng Yang is a Canadian citizen and a Professor of Law of some 35 years of university working experience. He earned a Ph.D. in Criminology from SFU in 1996 and a LL.M in Shanghai in 1984. He was China Program Director at ICCLR during 1995-2010. He has taught all levels of university courses in law, international relations, criminology and criminal justice since 1984. He was called to the Bar in Shanghai in 1985 and practiced law in China from 1985-1990. He was Professor of Law, Pro-Rector and Vice Rector at University of Saint Joseph in Macau during 2010-2018, Professor of Law and Acting Dean of Law School at Shantou University in 2008-2010, Visiting Professor and Supervisor of Doctoral Students at College of Criminal Law Science of Beijing Normal University in 2007-2018, Professor of and Vice Dean of Law Faculty at Macau University of Science and Technology in 2002-2007, Visiting Associate Professor at University Macau in 2001-2002, Visiting Scholar at Cambridge University in 1986-1987 and 1990, University Lecturer and Director of Comparative Legal Studies at East China University of Political Science and Law in Shanghai during 1984-1990. He is a Member of the International Society for the Reform and Criminal Law and the International Association of Anti-Corruption Authorities. He was an expert/advisor of the Canadian Bar Association and several other Canadian executing agencies for their CIDA-funded major projects to promote the rule of law in China through law and justice reforms in 1995-2015. He was an International Expert to UN Office of High Commissioner for Human Rights in 2002-2005, expert member of the Government of Canada delegation to the Canada-China Human Rights Dialogues, UNDP instructor for its legal aid training project in China and corrections law project in Vietnam, and delivered training seminars to prosecutors in Taiwan.