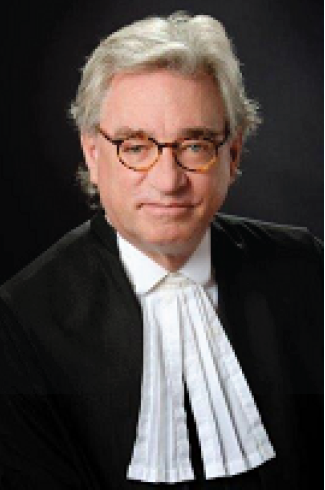 Judge, Court of Appeal of Quebec

Patrick Healy was appointed to the Quebec Court of Appeal in 2016 after nine years as a judge of the Criminal and Penal Division of the Cour du Québec in Montréal. Before his appointment to that court in 2007 Patrick Healy was a professor of law for almost twenty years at McGill University. There he specialised in matters of criminal law, including substantive law, procedure, evidence, sentencing, comparative criminal law and international criminal law. He taught these subjects and has published extensively in all of them. He has lectured widely in Canada and abroad. For many years Patrick Healy was involved in issues of law reform. He advised governments and various nongovernmental organisations and testified on several occasions before Parliament on issues concerning pending legislation.

As counsel Patrick Healy acted for the prosecution and the defence in Quebec and elsewhere. He was Counsel to the firm of Shadley Battista in Montreal. For many years he was a member of the Comité permanent en droit criminel of the Quebec Bar and a member of the Executive Committee of the Canadian Bar Association (Criminal -Quebec). He also served as a member of the General Council of the Canadian Bar Association in Quebec. Patrick Healy was a member of a committee of inquiry appointed under the Judges Act to inquire into the tenure of a judge of the Superior Court of Quebec. He advised the Canadian Judicial Council on many occasions with regard to judicial discipline and other matters. He was a member of the International Association of Penal Law and of the International Association of Prosecutors. Since 1995 Patrick Healy, with Anne-Marie Boisvert, has edited the Canadian Criminal Law Review. He is a governor of the Fondation du Barreau du Québec. He has lectured extensively in programmes for the continuing education of judges and lawyers, often with the National Judicial Institute. He was President of the Canadian Institute for the Administration of Justice (2013 – 2015) and is a director of the International Society for the Reform of Criminal Law. Until his appointment to the Court of Appeal he continued to teach two courses each year as an adjunct professor in the Faculty of Law at McGill University, where he remains also a member of the Centre for Human Rights and Legal Pluralism.